An active, but rather calm incremental game about humans and nature.

Check out my indie game Recollection, my game dev YouTube channel and more at https://linktr.ee/Erkberg

It was a nice game. Thanks for making it :3

Happy to hear that you enjoyed it, and thanks for leaving a nice comment! :)

Hey just fyi I posted your game over at https://www.reddit.com/r/incremental_games/comments/x6nxto/ungrow_by_erkberg/ because I quite enjoyed it.

Thank you so much for playing and especially for sharing it on Reddit, really appreciate it! <3

This game gets a solid 'meh' from me. Just feels fake-deep, like "oooh, you destroyed all the plants! You monster!" Just not a fan of games that say, "you're a bad person for interacting with this game where you have no way of fixing what you broke."

Thanks for playing the game all the way through! And sorry to hear that you didn't like the ending. Personally, I'm a fan of only really realizing the damage done when it's already too late in some games, but I can understand your point. It would be much better if there was some alternate way to play the game, and that is actually still on my todo list for future updates.

I fully agree with the notion the game would have a stronger message if there was another, less destructive way to play the game. I guess I just had one too many cases where a game demanded I do something Bad to progress, only to all but call me a devil for my trouble.

That, and I can't deny that 'clean up a space' is a very effective way to get my focus in a game. It just feels bad if that focus is treated as 'the wrong answer to the question the game is asking.' Feel free to take my criticism with a few weighty grains of salt.

If you allow me to ramble for a bit, the game up until the end could also be interpreted as someone visiting an isolated grave and deciding to let the other people interred here rest, remembered and cared for as you explore what was once a graveyard and uncover those that were laid to rest there, undoing the damage that years of uncaring decay have done in whatever small way you can. From that perspective, I did feel as if the ending dismissed my efforts as just, an unfeeling need to destroy.

I may be over-analysing a game that stops unlocking new mechanics once you get the harvesting range upgrade. As in, once you get that upgrade, any other upgrade is either 'the same thing you previously got, but this time for your semi-robotic aides' or a passive 'you have put in the effort, so toil no more' reward for what you have done up until that point.

Still, I was quite hopeful for the 'restoring a cemetary' interpretation, until the end made it quite clear that I committed an act of destruction for the sake of achievement. Between the somber atmosphere from the simple black background, the sad music and the motif of skulls and gravestones, I assumed and hoped.

Please do not take this as a dismissal of the game. Mechanically, the game is enjoyable, and does not overstay its welcome. If anything, I am a little disappointed by the ending but otherwise enjoyed the game well enough for what it was.

Hey, thank you so much for your detailed and thoughtful comment! (and sorry for the late reply...)

I really hope to get around to continue working on this game someday, especially to deliver the message of the game in a more elegant way. I can also understand the interpretation of the graveyard theme, that's actually something one of my playtesters also felt strongly, and the visuals clearly point in that direction. I actually like this as a metaphor, but should probably try to avoid evoking such mixed feelings between the perceived gameplay and ending, like you described. Will have to think about that :)

After unlocking the 4th player upgrade, I am no longer able to harvest. Only helpers work.

Thanks for checking out the game! And sorry to hear about the problem. I'll investigate this bug and make fixing it a top priority for the next update.

got to the end. My mission of 100% of plantlife going extinct and starting a new extinction was successful. I also succeeded in beriding myself of my own livelyhood :)

Thank you so much for playing all the way through to the end! <3

The game doesn’t save, which prevents me from completing it as my CPU quickly overheats while the game is running. Without being able to close and reopen the game, I can’t get very far.

Thanks for trying the game and leaving feedback!

Sorry to hear that it doesn't run well for you. May I ask what CPU you are using and for how long you can play?

I'm planning to update the game every now and then to add new features and fix problems. But since this is currently just a hobby project, things might take a while. Not sure yet if a save system is the best solution for the game (as implementing this will take quite some time and the game is only 30 mins long), but I will definitely look into optimizing the game concerning performance, which might lead to it being playable by a wider range of people (and CPUs ^^).

I’m running an old AMD Phenom II X6 1045T. I get about 10-15 minutes of time with the game before the temp becomes dangerous. Given the age of the CPU I doubt it’s feasible to optimize the game to properly support it, which is why I feel like saving progress between page loads makes more sense. Plus if you’re planning on extending the game with more features, you’re going to need a save system sooner or later anyway :)

I did enjoy what I was able to play of it though! It reminds me a lot of Peter Talisman.

Well, within 10-15 minutes you have probably already played most of what the game has to offer at the moment (except for the ending screen), so no need to worry about the rest of the game (for now). I still believe that a performance optimization could help, even for your old CPU, as the game is pretty much completely unoptimized now and there's a lot of potential there. And I have yet to decide on whether to add a save system or not. Ungrow is not one of those endless idle games. It might become longer with updates and then a save system would make more sense, but that is all still some time in the future :)

The game is pretty similar to Peter Talisman and partially inspired by that one, you're totally right about that. But I don't think that's a bad thing, I really liked that game :) And I think they're different enough already and I'll try to make this one even more special with the planned updates.

Is there an ending to the game?

I unlocked all tombstones. There was one area with a different symbol than the tombstone ones but when I freed this one, nothing happened.

Thank you so much for playing the game and leaving a comment, really appreciate it!

There is an ending (once all grass has been harvested), but don't worry if you didn't play that far. It takes quite some time to get there and all you get in return is an ending screen with some text, so nothing too special (yet, updates are planned...)

The one with the different symbol unlocked something else that you may have only noticed subconsciously, and that is "Auto Harvest". Once unlocked, the player will harvest without having to keep the interact button pressed.

Ah, I got it. Nice game, thanks

This was a great little game, I really enjoyed it! I'm happy to hear you're planning on expanding it, so I hope the coding and the ideas progress smoothly ^^

Thank you so much! Super happy to hear that you enjoyed it! :)

A first update is already in the works and coming together nicely. If everything goes well, it could already go live next week.

Hey, thanks for checking out the game and leaving feedback!

Did you discover the second tombstone? The game is an "active incremental", so you have to progress through it to get to the more idle parts. And the goal is more or less exploration and upgrades at the moment, but it does have an ending too :)

Sorry to hear about your not very fun experience with the game! There is probably not enough instructions in the beginning of the game, I will improve this in an update (which will come out next week at the earliest though, since updates are currently blocked because this game is still being rated as part of the Kenney game jam).

If you'd like to give it another try now already, here's how to progress: You have to stand close to the tombstone and press the interact button. Then after purchasing the first upgrade, something new will reveal itself and you have to reveal it fully.

And after that it's pretty much more of that, exploration and upgrades :)

good choice of muic hard to understand in the beginning. couldnt harvest grass after getting the second tomb stone

Thanks a lot for your feedback and checking out the game!

So you kept the interact button pressed while walking through grass and it didn't do anything? That sounds like a bug, but I haven't encountered it before... Do you have any more information on what you did before encountering it? Does it occur if you restart the game and try again?

It's relaxing (good choice of music), I like that kind of game. I'm not sure to understand the grass to tombstone mechanic, but I went to 50.

Hey, thanks for playing the game and leaving a comment, really appreciate it!

You can press the interact button when around the tombstone to open the upgrade screen and advance the game, hope you'll give it a try!

(I had an interaction highlight in there in a previous version but my testers said it was unnecessary, so I removed it. Probably shouldn't have done that ^^)

I played a second time and like it a lot ! I discovered all the tombstones and kept playing for 30 min. Nice job. There's a potential farming mystery game here, with a good narrative added.

Wow, thank you so much for giving it another try, that's awesome!
And great to hear that you enjoyed it in this state already! I am planning on extending the game someday in the future, potentially even into something of a commercial release, stay tuned :) 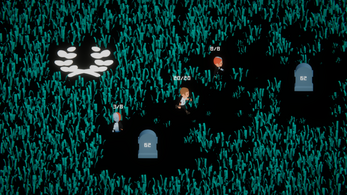 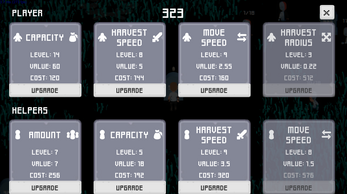 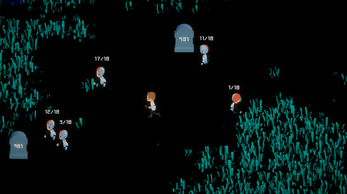